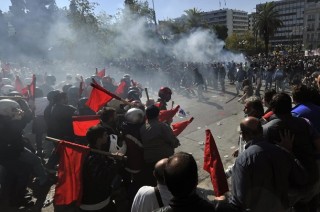 This documentary deals with biggest Greek strike since the right-wing junta was overthrown almost three decades ago, VICE travels to Athens to meet up with the people behind it.
First day: About one million protested against the EU backed regime and its new proposed austerity measures. Around 14:00, the protest turn violent. Large-scale clashes in Akadimias Street and clashes in front of banks next to the University Refectory in Panepistimiou Street.
Second day: Clashes erupted as protesters tried to reach the Parliament. An anarchist block attacked Stalinist lines. Police fired tear gas. The clashes were severe; flares were shot straight into the crowd. Generalized clashes between hundreds of anarchists and Stalinists in Syntagma took place; stones, bottles and flares were thrown. Protesters tried to break through PAME lines to reach the Parliament. The communists attempted a counter attack and beat up several – not only black bloc protesters. A 53-year-old man who participated in today’s Athens demo, due to extensive use of tear gas from the police.
Here the video
eagainst.com